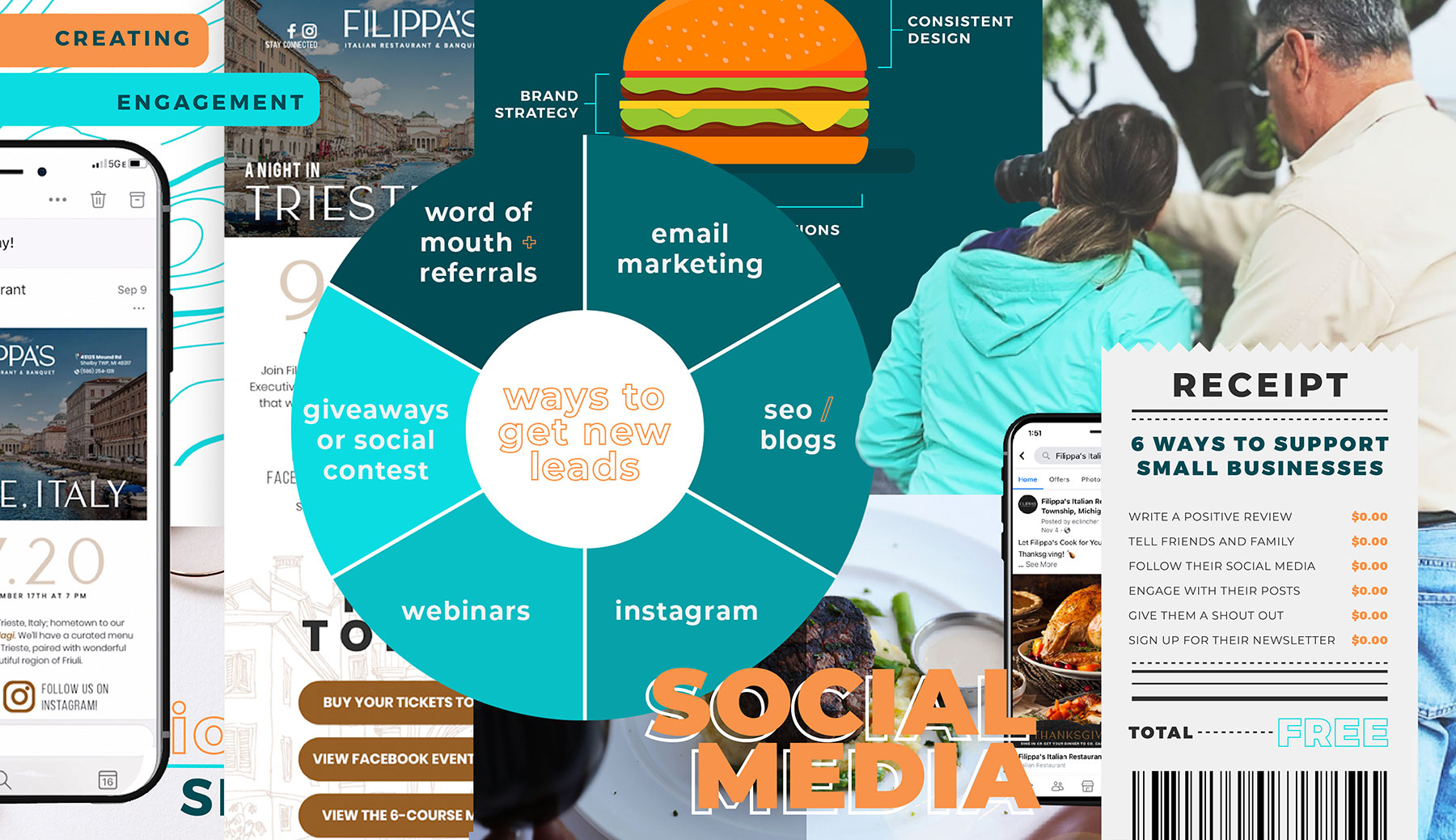 Cloverleaf Pizza was facing a problem.

As a 3 location Detroit pizzeria, Cloverleaf was having challenges competing with the major chains in the Detroit area, the toughest pizza market in the world. What’s worse was that the mailer advertisements that cost Cloverleaf big money to make were not providing the returns needed. Even though Cloverleaf had both phenomenal service and even better products, they struggled to penetrate a larger market.

After years of dealing with flat sales and overwhelming competition in the Detroit pizza market, Cloverleaf finally decided to hire advertising firm PGN to address their branding issues, increase their market share, and boost sales. Cloverleaf has been working with PGN for the last two years, and there has been a complete revitalization of its business, notching monthly sales increases upwards of 50% while opening one new franchise location.

Cloverleaf saw the benefit of working with an agency experienced in promoting pizzerias. PGN saw the remarkable true story behind Cloverleaf Pizza and was able to retell it through a specially tailored rebranding effort that created thousands of new life-long customers.

Seven decades there was no such thing as a Detroit-style square pizza. It wasn’t until Gus Guerra opened his first pizzeria in 1946, now Cloverleaf Pizza, and began serving up his wife Anna’s thick-crust family recipe that the Detroit Square was born. Here’s the true story of how the pizzeria that brought you the Detroit Square was able to bring itself back into prominence and greatly increase sales through a rebranding effort spearheaded by PGN’s blended marketing solution.

The Challenge Faced: Cloverleaf, Who?

Cloverleaf came to PGN with straightforward objectives: boost sales, gain marketplace recognition, address their branding ailments, and start franchising. In the past, Cloverleaf’s only marketing initiative was their age-old method of sending out 11×11 mailers once a month. The direct mail advertisements were expensive to produce, had mixed results, and didn’t actively engage the consumer or create a USP (Unique Sales Position).

This lackluster marketing strategy failed to compete with the flashy, large-scale tactics backed by the huge multi-marketing budgets of chain pizzerias like Jet’s, Hungry Howie’s or Domino’s, all of which are based in Detroit. A different approach was necessary if Cloverleaf hoped to grow their business in a meaningful way. Cloverleaf faced internal branding challenges as well.

Their original location on Gratiot had been around for 70 years and had the name Cloverleaf, but was operating under a different logo and messaging than the carryout location. Because of that, it was difficult to connect the carryout and the bar as one unified business in consumer’s minds because there was no consistency in the way that Cloverleaf presented its brand to Detroit pizza-eaters.

Understanding The Difference Between Marketing and Marketing Correctly

There is a marked difference between marketing, and marketing correctly. PGN proposed to help Cloverleaf do the latter by putting their advertising dollars to work more efficiently. This new change of direction involved, first and foremost, creating brand awareness and cohesion rather than brand chaos and confusion. PGN brought Cloverleaf a multi-layered marketing solution honing the Cloverleaf brand, effectively utilizing social media (to harness better consumer engagement), and wisely using marketing dollars to boost sales and better position Cloverleaf to begin franchising.

Before, the Cloverleaf brand had a crowded and unclear voice in the marketplace. They unintentionally sent mixed messages that resulted in disorganization in the brand and worse, apathy on behalf of customers. Fixing the brand confusion was a clear first-priority. Consistency in a brand is the key to success. PGN knew creating that consistency would bolster Cloverleaf’s sales and gain marketplace recognition.

Fixing the Cloverleaf brand image required, consistency in logo and message, but also an understanding of the hierarchy of design and the principle of “eating with the eyes.” PGN brought this expertise and guided Cloverleaf in replacing stale images with lively and appetizing photographs that enticed the consumer while putting out messages that inspired the consumer to dive deeper and explore what Cloverleaf had to offer.

Additionally, PGN created an interactive web page that employed unique animated GIFs, e-blasts, and also designed and launched a new easier-to-read logo and byline to help better set the Cloverleaf brand apart in the marketplace. One of the keys to rebranding Cloverleaf was the creation of new artwork and designs to continuously convey the same look, feel, and quality statement— making the brand viable in the marketplace.

One of the key beliefs PGN stood behind when rebranding and marketing Cloverleaf Pizza was the idea that there is no substitute for the truth. Lots of people want to claim to be the original, but very few actually are. PGN wanted to make sure that the Cloverleaf story was personalized and that it highlighted the reality that there was something in the Cloverleaf story that customers could live in and experience in a special way that was different than the other pizzerias.

Cloverleaf had been an exceptional part of the lives of Detroiters for many decades. An honest and exceptional brand story wasn’t missing. What was missing was an expertly crafted method of sharing that story with consumers. PGN told Cloverleaf’s story of premium pizza, quality, and family-style expertise in a compelling and cohesive way across every platform, from their website, social media and design.

This involved: utilizing sweepstakes to create long-term customers and foster engagement, rebranding the pizza as a premium product and retelling the Cloverleaf storyline in a more dynamic fashion.

A final facet of the new strategy was an emphasis on team building. This involved meeting with and educating the Cloverleaf team on a weekly basis about what was and what wasn’t working in terms of their branding and marketing strategies. The idea behind the team-building efforts was that, as a small business competing with national chains, meaningful success hinges on creating a unified front of employees with a top to bottom understanding and commitment of the Cloverleaf brand that consumers know what they’re getting and love it every time.

Does An Online Strategy Actually Work?

The results of the solutions, without exaggeration, were staggering. First, Cloverleaf’s social media engagement grew exponentially—going from just 247 likes on Facebook to 8,789 and counting in just a few short months, with an average post engagement of 11,000 per week. Once people were exposed to the Cloverleaf brand, they LOVED it.

Everyone loves a success story and Cloverleaf Pizza is just that. When utilizing social media for promotion, engagement is a proven tool that advertising truly does work if you can actively and correctly engage the consumer.

Cloverleaf grew a huge following of actively engaged consumers due to smart and unified branding, as well as a responsive social media messaging that offered desirable prizes and discounts through unique contests. A social media specialist is a must to create unique content for Cloverleaf’s Brand and provides swift responses to any inquiries from customers that is growing their following through approachable interactions rather than an unyielding sales pitch.

Twelve months after handing over the advertising efforts to PGN, Cloverleaf recorded huge growths in sales at their original three locations. Cloverleaf saw boosts in sales ranging from 26.8%, to 39.5%, to as high as 53.8% over the span of just one year. Those with experience in the pizza business, or more broadly, the restaurant business, know that that sort of growth doesn’t happen by accident.

That only happens as the result of concerted efforts and well-spent advertising dollars. Is this largely online and social approach effective? When combined with a cohesive branding strategy, the numbers would say yes.

Notably, Cloverleaf was able to open their third franchised location in Roseville making it their fourth store. The boost in sales and the growth in overall revenue that Cloverleaf was experiencing allowed them to start to increase their market share and reach areas of Metro Detroit that Cloverleaf Pizza had previously never been able to access.

Now, after two years of working with PGN, Cloverleaf has four pizzeria locations across Metro Detroit with plans to open more locations in the near future. There has also been franchisee interest outside the state as far as Missouri with possibly large multi-state franchise agreements. Smart integrated advertising opened the doors for this Detroit pizzeria to garner a greater market share and open the doors to more franchising.

The secret that transformed Cloverleaf’s business and ultimately leads to their was knowing when to turn to a marketing professional. Many small pizzerias mistakenly believe that they know advertising and the branding processes well enough to manage their own marketing, but the simple reality is that they don’t.

If you don’t advertise correctly and utilize the right branding processes, then you’re simply wasting your advertising dollars. Even though many businesses falsely believe that they are saving money by not hiring an advertising firm, or a marketing expert they usually end up wasting resources by managing these processes on their own and eventually end up having to employ an advertising agency when it is nearly too late.

Cloverleaf’s management team made the smart decision to invest their money in a relationship with marketing professionals; the payoff was more than delicious.