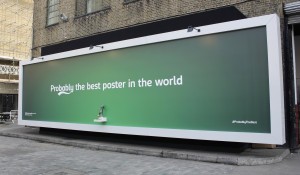 Best ad in the world? Definitely, if you’re thirsty.

Carlsberg makes a pretty good beer. For decades, they’ve liked to claim it as “Probably the best in the world.” We probably wouldn’t go that far.

But if they make pretty good beer, it’s certain that they do pretty great advertising – and one of their recent billboards proudly tells you so.

“The best poster in the world” – We’d probably agree on that. Why? There’s no compelling central image. No riveting sales message. Not even a decent logo. But look closely: that spot in the center of the billboard is a tap that’ll give anyone who walks up a half pint of Carlsberg’s signature product.

When you’re in the advertising business, you’ve got to acknowledge when “The Other Guys” have done a heckuva job. Carlsberg’s agency Fold hit a home run with this one.

Here’s why. Carlsberg’s gimmicky one-off billboard nails most of the key elements that make an ad succeed:

• Simplicity. You “get it” in a second; you think about it for a lot longer.
• Value. There’s something in it for you if you take the time to look – if not a free beer, at least a smile.
• Mystery. As the saying goes, it’s better to say too little than too much. Leaving the logo out stimulates curiosity and invites the question “who did this?” in the mind of the viewer – extra time that they spend thinking about the ad – and by extension, the company and its product.
• Novelty. If every beer billboard had a tap in the middle, nobody would notice this one. But they don’t – so everybody notices this one, to the tune of over 40,000 indexed Google results after just a couple of days.

The way we see it at PGN, marketing and advertising work best when you respect your audience and offer them something of value in return for engaging with you, however briefly. It can be a free product; it can be valuable information; it can be an irresistible image, a memorable tune, or a good laugh – but it’s got to be something the audience wants, even if only for an instant. It has to be immediately available. And yes, it has to be free.

This billboard delivers on all counts. Carlsberg and Fold7 clearly get it. They could have filled that 150 square feet of signage space with foaming frosted glasses, bleached blondes, or hundreds of other shopworn images – but they chose to fill it with surprise, delight, and value instead. Judging by the 40,000+ search results, their target audience – smart, reasonably discerning consumers interested in quality products – clearly appreciates the effort.